Kindergarteners need some old fashioned ways. If you have been around education for a while, especially kindergarten, you know it has changed. Kindergarten seems to have become something like first grade, part one. Has anyone else noticed that? If you are new to the education game, perhaps this seems normal. But it's not. Kindergarten should be, well, kindergarten.

What has changed? Kindergarten used to be a real "garden" of children. A time and place for nurturing. Children used to listen to stories. They would explore painting and coloring. Building blocks, make believe kitchens, playing store, were all part of the kindergarten picture: Making friends and learning to share.

Was this all fun and games? Absolutely not! Don't let anyone ever tell you that. During this so-called "playtime," children are learning how to interact with each other. They are working together.

Critical thinking is being developed as they decide the rules of these make-believe games and drawings. Their imaginations are running wild.

These are the very building blocks of being great future students, but the blocks are being shuttered away. And that's a shame. Of course writing and spelling their names is important. Sure they need numbers and alphabet. But worksheets? Homework? Drill and kill? Just another "first" grade? Stop the insanity. Kindergarten was invented to be different. Not to be just another grade level.

Teachers have brought this upon themselves actually. We are not active enough in developing curriculum. This is left to college academia. We also have done a poor job in later grades, so we feel the need to start early. Has this actually helped? Absolutely not. It's made things worse. We now have parents sitting a child out until they are older. That's insane. The child will not be ahead of the game, but severely behind!

What's the solution? At first glance, if you are a kindergarten teacher, you may say, "I have to do what they tell me." Yes indeed. But you you don't have to necessarily do it one way. Your creativity must shine here.

It must now be a modern kindergarten teacher's job to incorporate those old fashioned things that seem so passe now. Let them build, color, play, explore, and interact naturally and on their own at least part of the time, if not the majority of the time when doing things you are mandated to do.

If that seems impossible, then set aside time to be real kindergarteners and nothing else. You must make time for this. Get creative during snack time. How can you change this lesson to be more interactive, nurture creativity, exploration, working with others.

If kindergarten teachers fail to do this, they will contribute to the failing of these students later on. And that would be a shame.

Numbers, Shapes, and Letters for Kindergarteners 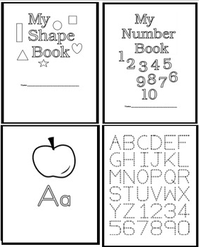 Available on TeachersPayTeachers only $2.99

Available on TeachersPayTeachers only $2.99

Common Problems of Kindergarten - Effective ways of dealing with the top problems in a kindergarten classroom.

What to tell parents - Parents of kindergarteners have questions. Do you have the answers?

How to get kindergarteners to listen - Kindergarteners are active and it can be difficult to get them to really pay attention to a teacher.

Making Kindergarteners Future Learners - Kindergarten teachers are the first teachers. After being in your class, will they be ready, willing, and able to learn in future grades?

Nurturing Kindergarten Readers - The basic building blocks of reading are a neccessity for kindergarten. Get them to love reading!

Visit our homepage for more articles and resources: Teachersindex.com